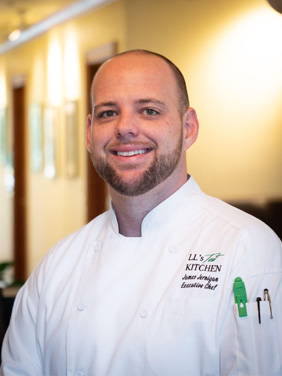 After graduating from Le Cordon Bleu in 2009, James traveled the country, learning from world-renowned Chefs such as Daniel Boulud, Wolfgang Puck, and Joachim Splichal. Chef James shares that travelling has influenced his culinary skills in a significant way, allowing him to create flavorful dishes that bring together both original and unique qualities. 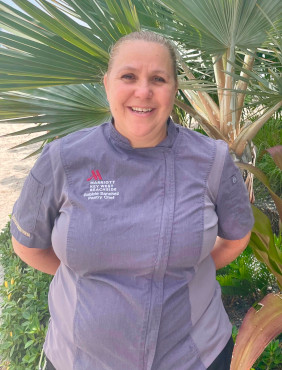 Chef Robbie Sanchez got her start in hospitality as the General Manager of a Chuck E Cheese location. Upon her move behind the scenes, she was classically French trained at Cordon Bleu in Miami and graduated in 2017 with an associates in Patisserie Arts. Originally from Wyoming, she was inspired to be in the kitchen creating pastries with her grandmother. Chef Robbie often claims that her grandma’s skills could “Rival any Pastry Chef”. Prior to working at the Key West Marriott Beachside, Chef Robbie gained experience at 3030 Ocean in Fort Lauderdale, under executive Chef Adrienne Grenier and Pastry Chef, Huma Nagi. Within a year, Chef Robbie had taken full responsibility of the construction and creation of all desserts. She learned the skill of trusting her pallet and focused on developing her specialties, which include cheesecake and other light desserts. Her favorite is to mix the savory and sweet tastes together. Chef Robbie Sanchez is excited in continuing her Pastry experience as the Head Pastry Chef of Tavern N Town and Key West Marriott Beachside..

Corporate Director of Food and Beverage

Tarun got his start at the Hyatt Regency Pier Sixty-Six as food and beverage manager in Fort Lauderdale, Florida. He then moved to Key West, working his way up to assistant complex director of food & beverage at the Waldorf Astoria Casa Marina and The Reach Resort where he re-branded the resort’s restaurant. He has over 15 years of Food and Beverage experience in the industry. His most recent experience comes as executive director of food & beverage at Ocean Edge Resort & Golf Club in Brewster, Massachusetts. 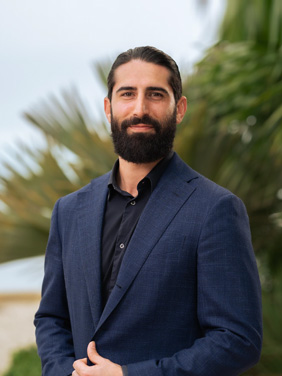 Director of Food and Beverage

Philip got his start in Food and Beverage in Marathon at Tarpon Creek as a bartender. After 3 months he was quickly promoted to a Bar Manager and quickly learned the ropes of management within Tarpon Creek. After 15 months at Tarpon Creek, Philip followed his passion and was admitted into FIU in Miami in the Hospitality Program. After graduating, Philip got into the Marriott Management Program. At this time Philip began work at the Marriott Dessert Ridge, in Mesa, Arizona where he was a Voyager in the Food and Beverage Department.

He worked his way through several establishments on property. In August of 2020, Philip moved back to Key West and began working at the Key West Marriott Beachside. During his time, he has been involved in rebranding the pool bar from Blue Bar to Chicken Walk. He has also helped reopen Tavern N Town after the pandemic and continued to build his team on property and further assets of Spottswood Company Inc. 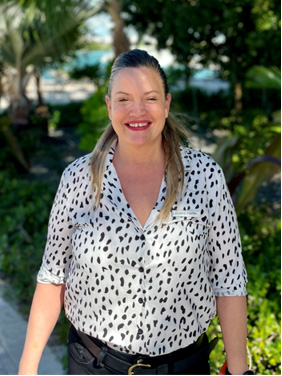 Justine got her start in the Key West hospitality world with Spottswood Companies in 2006. Justine worked with George Galvan, at the original Days Inn and then helped open the Key West Marriott Beachside front desk/reservations department. Shortly after Tavern N Town opened, she began her career as a server and supervisor and worked for Tavern N Town for the 1st year that it was open.

Then, she began to work for the Half Shell Raw Bar. and gained a great amount of Food & Beverage and Leadership experience. After working there for almost 10 years, Justine came back to the Tavern N Town team, this time with experience that excelled her to be a successful Restaurant Manager. Justine loves to spend time with her husband and 2 beautiful kids that were raised in Key West.